While a soldier, he divided his cloak with a beggar who turned out to be Christ in disguise; he left the army to become a Christian; he was later bishop of Tours.

On horseback, clad in soldier’s uniform, holding half of a short cloak cut in two; Christ as a scantily-clad beggar (halo, crown of thorns, stigmata) holds the other half.

Converted from his tax-collector’s table, he authored the gospel that bears his name; he was martyred with lances.

A gentile priest-king to whom Abraham did homage, taken as a prefigurement of Christ as priest of the Eucharist because of Melchisedek’s association with bread and wine.

Beardless, wearing a red robe with a blue sash and a beehive crown with a cross on top, holding a chalice with a cross-topped host emerging from it. He is paired with Moses on either side of Gabriel.

The leader of the Hebrew people from Egypt to the Promised Land.

A black-bearded man in a long robe holding the tablets of the law; three rays come from his head (see Ex. 34:35). 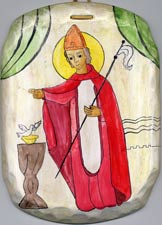 A bishop renowned for good works (giving money to dower poor girls) and miracles (raising to life three children who had been pickled in a brine tub).

Wearing a bishop's cape over a white alb and a miter, bearded, holding a palm and a dove in a cup or shell.

An Egyptian hermit, reputed to have worn only a loincloth of leaves and his own abundant hair.

Kneeling in a loincloth or a hermit’s cloak, either holding a crucifix or with one on a ledge before him, perhaps showing the wounds of penance. 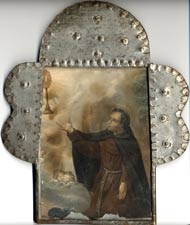 Lived: 1540-1592
Feast day: May 17
Patronage: of sheep and shepherds; his patronage of cooking may be a twentieth-century addition.

This shepherd became a Franciscan lay brother and worked in the dining room or as doorkeeper; very devoted to the Eucharist. 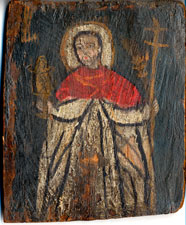 Perhaps British, perhaps Italian in origin, he was taken to Ireland as a slave, escaped, became a priest, returned to Ireland as a missionary and became the first bishop.

The leader of the apostles, the first pope, the custodian of the "keys of the kingdom of heaven" (Matthew 16:19), hence in folklore the keeper of the gates of heaven. In Mexican and New Mexican religious folklore, he takes the trickster's role; see Hynes and Steele, "Saint Peter: Apostle Transfigured as Trickster," in Hynes and Doty, eds., Mythical Trickster Figures(1993), pp. 159-73.

In long robes, bearded, with a key or keys, sometimes also holding a book; he often wears the triple papal tiara and sometimes carries a crozier.

A Spanish Jesuit who did missionary work among the slaves imported to Central and South America.

I have never seen an example of this subject, but Willard Houghland, Santos, A Primitive American Art(1946), 42, describes “San Francisco Xavier” as depicted with “crucifix, bell, vessel, and negro. Portrayed as standing figure with beard, in white surplice.” This is surely Claver’s iconography, not Xavier’s.

Lived: c. 1182-1258
Feast day: January 31
Patronage: protector against the Moors in Spain, hence probably against Indians in New Mexico; patron of freedom for their captives.

Fought as a soldier against the Albigensians, a co-founder of the Mercedarians, an order to ransom captives of the Moors.

Wears chasuble or full scapular, bearded but not tonsured; hands clasped; one angel holds a book in one hand and places the other on the saint’s head, another angel holds a crucifix.

A convert of the Johannine church and the bishop of Smyrna, he was burned to death.

Standing in a short robe, holding three nails (?) in one hand and a three-branched palm in the other, with spots on his lower legs. His sole New Mexican appearance resulted from Policarpio Córdova’s donating the side altar screen of Ranchos de Taos; see Boyd, Popular Arts of Spanish New Mexico (1974), 353, 357; Wroth, Chapel of Our Lady of Talpa(1979), 29, pl. 13.

Roman martyrs whose tomb and basilica on the Appian Way were venerated from early times; legend identifies them as jailers converted by Peter and Paul.

Both clothed in Roman tunics and cloaks, holding spear and palms, being baptized by an angel with a shell of water; a prison like structure in the background.

Lived: c. 930-1053
Feast day: July 4
Patronage: Protector of animals; perhaps there is a Diana-Artemis syndrome, with chastity, hunting , and protection of young animals being found together.

A Bohemian, by some accounts a king, who became a hermit in the forest where a deer took refuge with him when hunters pursued it; the saint later founded an abbey.

Wears a biretta or miter and a black cloak over a white robe and holds a book or a cross, a palm or a staff; there is a deer (rarely well drawn) nearby. Compare San Gil Atonogenes, #84.

Died: 1240
Feast day: August 31
Patronage: of pregnant women, women in childbed, and the unborn; patron of secrecy for the Penitentes; protector against being slandered or cursed; protector of captives and those oppressed by the infidel, with a possible application to Anglo land-grant manipulators (Robb, Hispanic Folk Music of New Mexico and the Southwest, p. 709).

A Mercedarian (see #110), he traded himself into captivity to free some prisoners from the Moors; while a slave he refused to quit preaching as told, so his lips were padlocked; once released, he became a cardinal. His epithet refers to his being a caesarean birth from a dead mother.

Wearing orange or red chasuble or cloak over white robes; holding a monstrance and a wand with three crowns on it; bearded; sometimes with dots above and below his lips.

Died: 1337
Feast day: August 16
Patronage: against plague, especially smallpox; against wounds; against cancer; pardon from sins and punishment for them. (New Mexicans confuse San Roque with Job and with Lazarus the beggar of Luke 16:19-31.)

A French layman who devoted his life to the care of the plague-stricken.

Usually dressed in a tunic, cloak, and boots with a traveler's hat and a staff, sometimes as a beggar; occasionally he is shown in a blue Franciscan habit. A dog licks his prominently displayed sores, and sometimes an angel brings him bread. 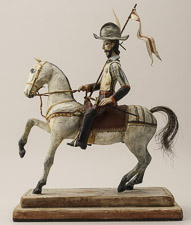 Source: Biblical
Feast day: July 25
Patronage: of warriors, especially when fighting the enemies of the church; patron of horsemen, of corridas del gallo, of the sowing of fields. He appeared at various battles fought by the Spanish against both Moors and Native Americans; see Chapter V above and Donna Pierce, Santiago: Saint of Two Worlds, p. 37.

Brother to John the Evangelist, with whom he may take the Castor role of the Dioscuri, James was reputed to have been the apostle of Spain; his shrine at Compostella in northwest Spain was a famous medieval pilgrimage goal. The six Jameses in the New Testament are constantly confused and conflated. Santiago appeared numerous times during the history of Spain (especially at Clavijo) as well as in the early days of Christianity in Mexico, New Mexico, and southern Colorado. See Rafael Heliodoro Valle, Santiago en América, pp. 19-20; Joseph Winter, New Mexico Magazine (March 1986), 53-57; Robert Torrez, El Palacio95 # 2 (Spring-Summer 1990), 46-55.

Bearded, in a soldier's uniform with a spear or sword and a pennant, he rides his horse over the bodies of fallen Moors.

Source: Biblical
Feast day: December 21
Patronage: for faith; perhaps for the conversion of the (American) Indians.

After his doubt and his profession of faith (John 20), he went to India, converting the Indians until he was martyred by being pierced with lances.

Bearded and bare-headed, he wears a long green cloak over a red-brown robe. He might hold the lance of his martyrdom.

Of Italian birth, became a Dominican theologian at the University of Paris, composed eucharistic hymns.

Wearing a red mantle over white Dominican garb; holding a book and a shepherd's staff, tonsured and bearded; occasionally with a miter.

Lived: 1350-1419
Feast day: April 5
Patronage: of charity; perhaps a patron of penitents; patron of a good death. Padre Martínez printed a prayer for a good death derived from him (New Mexico Historical Review 12:38), and Rubén Cobos collected a prayer-poem: "San Vicente está en la gloria, / lo debemos venerar; / dichosas las criaturas / que en ella pueden entrar -- Saint Vincent is in heaven, / so we should reverence him; / happy those persons / who can enter there."

Son of an English father and Spanish mother, he was a Dominican preacher who worked especially among Spanish Jews and Moors and also worked to heal a papal schism. He advocated corporal penance and salutary fear of God. He was reputedly a wonderworker.

Winged, holding a crucifix with his left hand and pointing to God with his right index finger; wearing a tonsure, a black cloak over a white gown, a rosary around his neck; a skull in the background. See Boyd, El Palacio57 (1950), 193-97.

A lay lawyer, he served as head of the Inquisition at Granada; later he took orders and became bishop of Lima.