Joachim and Ann were the legendary names given the parents of Mary, the grandparents of Jesus; in the extended families of New Mexico, grandparenthood was a very important relationship.

A woman holding or standing near a small girl.

An aged deaconess, she had her teeth broken off, then was led to a bonfire and asked to renounce Christ, whereupon she jumped into the flames.

In a long dress, with long hair and no veil; having teeth broken by a Roman soldier with large pliers.

A legend originating in the tenth century or so avers that her father shut her up in a tower and killed her for her faith, whereupon lightning killed him. She owes a lot to Danaë.

Wearing a crown, often with red plumes, holding a palm and a monstrance; a long dress with three flounces (honoring the Trinity); a tower in the background, often with three windows, and a thundercloud with lightning; sometimes a font or altar with a cross cut in the stone.

Lived: c. 1347-1380
Feast day: April 30
Patronage: against taking uncharitably of others, against infection, and against hunger.

A Dominican nun who lived at home, worked with the poor, and persuaded the pope to return to Rome from Avignon.

A white or white-and-black nun’s habit, holding a scepter with what seem to be three diamonds on it and a cross with a pennant; a crown of thorns, the three nails of the passion, and two candles are nearby.

A native of Assisi, foundress with Francis’s help of the Franciscan nuns (Poor Clares); a very committed penitent.

A carpenter’s daughter who dropped out of two orders of nuns, became a recluse, then revived the local Franciscan convent and eventually became superioress of the entire order of Poor Clares.

Wearing a white nun’s habit with a black veil, holding a crucifix.

A Dutch peasant’s daughter who met with an accident at the age of sixteen, was permanently bedridden, became a mystic.

The Museum of International Folk Art Museum researchers identified a bulto at Córdova as Felicity, a Roman matron who encouraged her seven sons to accept martyrdom under Marcus Aurelius, then accepted her own death. The legend derived from 2 Maccabees 7, the name from the folklore that came to surround it.

Standing in a gown, with pictures of seven young men’s heads on a scapular-like piece of cloth that falls from her neck to her feet.

One of two Christian maidens who were beheaded by the Moors; there is a legend that Flora’s brother, a Moor, threatened the pair with prostitution.

Wearing a dress with a crossed sash in front, holding a cross, with a wound in the back of her neck.

Lived: 1256-1302
Feast day: November 16
Patronage: of the medieval devotion to the Sacred Heart; patroness of the young, especially students; perhaps for faith and for souls in purgatory.

A German Benedictine nun and mystic with a great devotion to the heart of Christ as a symbol of mystical union with him; she is patroness of the West Indies, then understood to include New Mexico.

Wearing a black nun's habit, holding a crosier or simple staff with a pennant, holding a heart which is occasionally circled with thorns. 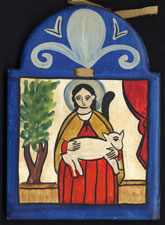 Lived: 1625-1696
Feast day: January 21 or 22
Patronage: of persons and animals lost in the wilderness, of those who work outdoors, of transients and runaways; for purity; for trees, flowers, crops, and flocks. There is a great alabanza in her honor, and Pedro Fresquis wrote on a retablo of her, "Santa Ynes deve ser Abogada de lo perdiddo en el campo -- Saint Inés must be the advocate of anyone or anything lost in the outdoors."

A discalced Augustinian nun of a convent near Valencia, especially devoted to the Eucharist; Josepha was her name in religion.

A long garment, sometimes a nun's veil or wimple, sometimes long hair; holding a palm and candle or a staff which is in flower; in a landscape of sorts sometimes with lambs.

Dressed in a queen’s crown and royal robe, holding a cross.

Reputedly the daughter of a Portuguese king, one of nine sisters born of a single birth, she wished to devote herself to Christ; her father, who at first had tried to kill all nine and subsequently wanted to marry them off to his advantage, was somewhat thwarted when Librada grew a beard, so he had her crucified. The whole tale grew up, it seems, from a misinterpretation of an early-medieval clothed crucified Christ; see Hippolyte Delahaye, The Legends of the Saints (1961; original 1907); Roland Dickey, New Mexico Village Arts (1949), p. 157; José E. Espinosa, Saints in the Valleys(1967; original 1960), pp. 93-94.

A crucified woman in long robes, with a hood or long hair; in New Mexico she never sports a beard, unfortunately.

Died: 304
Feast day: December 13
Patronage: against disease of the eyes.

A young girl in long robes carrying a palm and a pair of eyes (duplicates of her own) on a dish.

The mistress of a young nobleman, bearing him a child; seeing in his death a warning, she publicly repented her sins, joined the Franciscan Third Order, and served the sick, living otherwise the life of a recluse.

A woman in nun’s garb carrying a cross and a handkerchief.

Source: Biblical (the real Magdalen is treated in Lk. 8:2, Mk. 15:47, and 16:1-9; she is generally identified with the woman in Lk. 7:36-50, occasionally with the woman in John 8:3-11, and sometimes with Mary the sister of Martha and Lazarus in John 11)
Feast day: July 22
Patronage: of conversion from an evil life especially for women; she is particularly prayed to on Good Friday, since she stood beneath the cross.

Mary, not the sister of Martha and Lazarus, was a harlot converted by Christ, a witness of his crucifixion and resurrection.

In a long green dress, red cloak, no veil, praying.

Lived: 1381-1457
Feast day: May 22
Patronage: of girls in need of husbands, of marriage, of mothers, of those in bad marriages, of all who must bear suffering; for the impossible; against sickness. There was a fear that too great a devotion to Santa Rita might bring a woman both the virtue of patience and a bad husband to help her exercise it. Rita probably also had penitential associations.

By her parents' wish, she married a man who turned out to be a bad husband; became a nun when he and her two sons all died; had mystical experiences during one of which a thorn from Christ's crown pierced her forehead.

Wearing a nun's habit, holding a cross and a skull, occasionally with a wound on her forehead or the full stigmata. 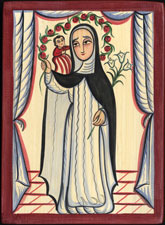 Like Catherine of Siena, she lived in her parents' home as a Dominican tertiary; a friend of Santo Toribio.

In a nun's garb of white dress and blue cloak, holding a crucifix and sometimes a scourge and a crown of thorns, with roses in background.

A poor girl, she preached in the streets of Viterbo against the Ghibellines and for the Guelphs, the papal faction; reputed to have been subjected to an ordeal by fire; refused entrance to the Franciscan nuns but eventually buried in their convent.

Wearing a white dress with a green cloak and a crown of thorns; carrying a basket and a staff or cross. 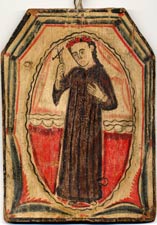 Died: about 1160
Feast day: September 4
Patronage: against plague, prayed to at velorios for the dead; patroness of engaged couples; probably patroness of penance for the women auxiliaries of the Brotherhood. One stanza of an alabanza praises her: "Contigo el demonio / se muestra impaciente / de ver a tu cuerpo / haces penitente -- With you the devil / shows himself exasperated / seeing that you make / your body a penitent."

According to a Sicilian legend, she was a girl of good family who became a hermitess; many years after her death, she saved Palermo from a plague and so became its patroness.

Wearing a black, brown, or grey dress, a crown of roses, long hair, holding a cross, usually a skull, sometimes a book or a scourge.

A Discalced Carmelite, leader of the reform of the order, mystic.

Wearing a nun’s garb usually of white and black, often a cloak; holding a crucifix, a crozier with a banner reading “HIS” and having the same emblem on her breast, and/or a palm.

Perhaps someone misunderstood the letters XI MM VV (eleven virgin martyrs) as eleven thousand virgins and then rationalized his misunderstanding by borrowing some Niebelungen traits and concocting a wild tale of a Christian British princess who did not want to marry a pagan prince, proposed extravagant conditions all of which were dutifully met, and was finally killed by the Huns, who were thereupon (not a moment too late) chased off by angels.

Rich robes, crown, pennant in her right hand, and in her left a scepter or spear elaborately decorated with flowers and a pennant; see Wroth, Christian Images(1982), 152.

Source: legendary (Sixth Station, Way of the Cross)
Feast day: Good Friday
Patronage: imprint of Jesus in our hearts; miracles, converts, sexual purity. Also, through association of Santa Verónica with the woman in Mt. 9:20-22 and Mk. 5:25-34, against hemorrhages.

This subject has been dealt with above, #15.

When the saint holds the veil, she usually is clad in a nun's habit.

Verónica is a sort of doubling of Our Lady of Sorrows and especially of Our Lady of Solitude. As identified with the woman suffering from a hemorrhage in Mt. 9 and Mk. 5, she elicits Jesus' passive more-or-less feminine side: with her womanly cloth she stanches his flow of blood (as by his healing power he had stanched her hemorrhage). Cf. Ewa Kuryluk, Veronica and Her Cloth (lots of nonsense along with some good stuff).