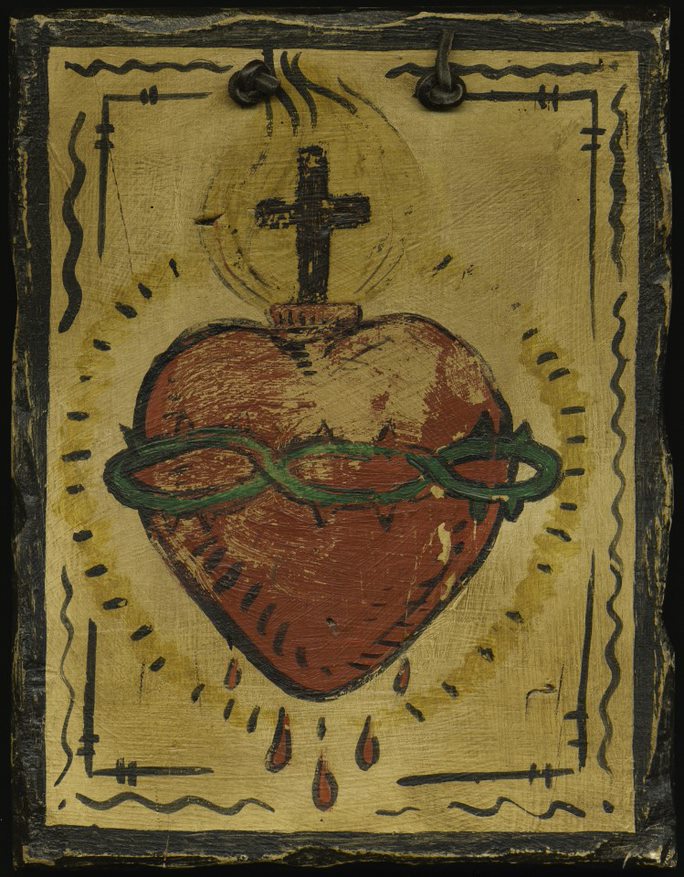 The collection includes nearly 1,000 items and is housed at Dayton Memorial Library on the Denver (Northwest) campus. Father Thomas J. Steele, who retired as a Regis College faculty member in 1997, assembled the collection from the mid-1960s until his death in 2010, and the collection continues to grow. A selection of santos from the collection is on display in the Thomas J. Steele, S.J. Santo Gallery on the library’s third floor, and is available for viewing whenever the library is open. Other santos are on display in Clarke Hall on the Northwest campus, and at the DTC and Thornton campuses.

Santo, translated literally from Spanish, means saint, although this collection also features other Roman Catholic holy persons and devotional objects. Santos generally are in the form of retablos, or paintings on wood panels, or bultos, which are sculptural carvings in the round. A distinctive santo style developed in northern New Mexico and southern Colorado in the 18th and 19th centuries. Using materials at hand, such as pine and cottonwood, and creating pigments from natural materials, santeros (saint-makers) made objects for use in religious observances as well as for home devotions. Some santeros were itinerant and created santos on commission. Santos were prayed to for particular reasons according to their individual powers, but also as intercessors, or go-betweens, to God. For example, Santa Bárbara might be prayed to for protection against fire; San Isidro Labrador might offer special protection against drought or other problems facing farmers. 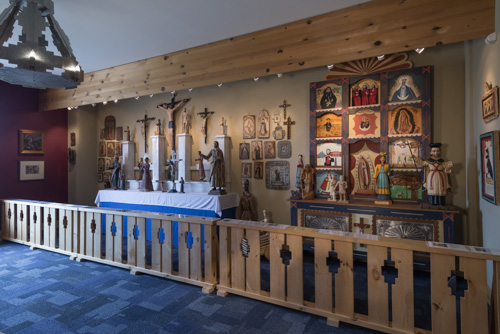 Traditional santo production waned in the 19th century as mass-produced consumer goods, such as religious prints and painted plaster saints, made their way into New Mexico via the Santa Fe Trail, and the Atchison, Topeka and Santa Fe Railroad. While a few traditional santeros continued to work into the early 20th century, the tradition was no longer being passed along in a sustainable way. At the same time, a group of Anglo patrons in Santa Fe began collecting traditional santos as art objects while they encouraged New Mexican Hispanos to revive their cultural traditions, primarily as a means to improve their economy through production and sale of tourist arts. During the Great Depression, traditional santos were recorded and reproduced, and other more contemporary works created under the auspices of the Federal Art Project of President Franklin Roosevelt’s New Deal. One enduring result of the early 20th-century “revival” is the annual Spanish Market featuring the work of contemporary santeros, held the last weekend of July in Santa Fe.