Skip to Main Content
It looks like you're using Internet Explorer 11 or older. This website works best with modern browsers such as the latest versions of Chrome, Firefox, Safari, and Edge. If you continue with this browser, you may see unexpected results.

The Dayton Memorial Library was named Department of the Year at the Regis University Academic and Student Body Award Ceremony in May 2014. The Library was recognized for its exemplary service, especially as noted by the helpfulness of the staff, extended hours during mid-terms and finals, the new open space on the main floor, more group study rooms, and study rooms with new equipment. 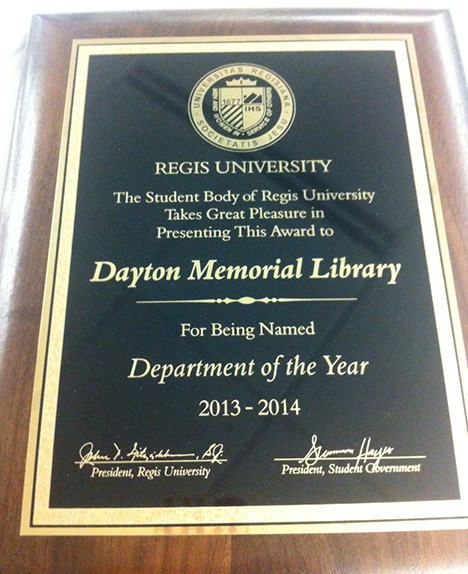 The Dayton Memorial Library was nominated again for the Department of the Year award, 2015. The nomination reads:

Have feedback or a suggestion for the library? Email lsuggest@regis.edu or fill out a paper form in the library and deposit it in the suggestion box.