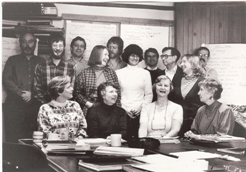 Board Members of the American Recorder Society, c. 1990

The American Recorder Society was founded in New York City in the spring of 1939 by Suzanne Bloch, recorder player, lutenist, and the daughter of composer Ernest Bloch; by Margaret Bradford, a teacher of recorder at the City and County School in New York; and by Irmgard Lehrer, a professional recorder player and teacher. Imgard Lehrer was the first president of the fledgling Society , and Suzanne Bloch was vice president. The purpose of the Society, according to Miss Bloch, was to enable recorder players to meet and learn to play better. Other aims included the publication of editions of recorder music. In 1950 the membership stood at a modest 3 figures.

The Society became inactive during the Second World War but was revitalized afterwards by Erich Katz, a German refugee and a brilliant musicologist, composer, and teacher. Dr. Katz was the Society’s Musical Director from 1951 to 1959. Under his direction the Society bloomed. Chapters were formed in Austin, Boston, Buffalo, Chicago, Memphis, Milwaukee, Philadelphia, Phoenix, and Washington, D.C. Dr. Katz initiated the American Recorder Society Editions, composing and arranging the early editions himself.

from the American Recorder Society Handbook, by Martha Bixler, 1991.

Courtesy of The American Recorder  [www.americanrecorder.org].