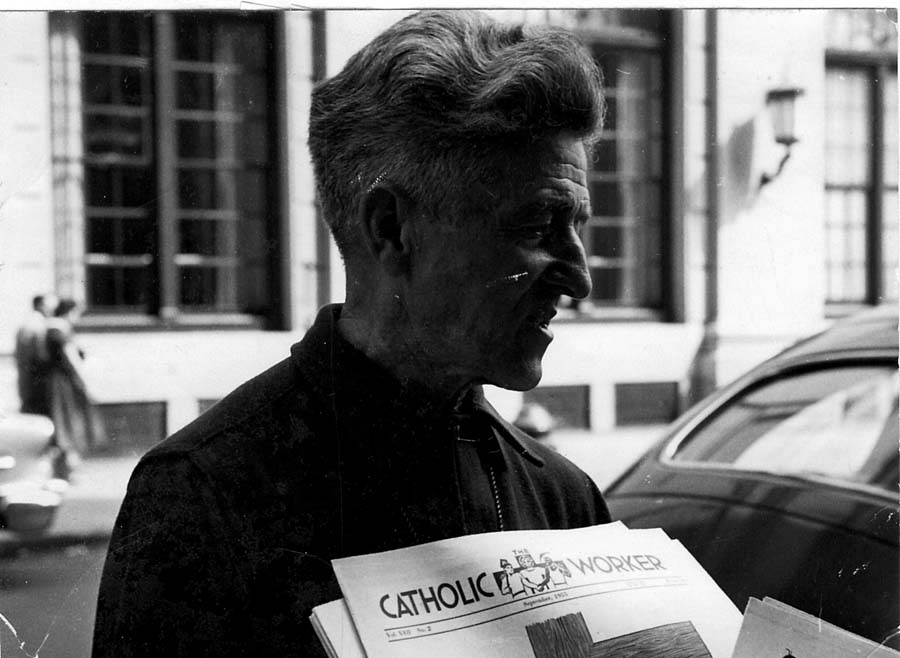 Ammon Hennacy , 1893 – 1970, referred to himself as a "Catholic Anarchist".  His  life was profoundly inspired by the Sermon on the Mount, which he read while serving a 2-year sentence in the Atlanta Federal Prison.  He was incarcerated for refusing to register for military service during WWI.  As a result of this reading,  he devoted his life to manual labor, activism for the poor, and pacifism.

To follow Christ and live as a pacifist, Hennacy refused to pay taxes to a government whose economy supported war.  In an effort  to avoid paying even indirect sales tax, he writes "I quit a civil service job nine years ago and live a life of voluntary poverty. I work by day for farmers, because no withholding tax is taken from my pay…I owe $129 income tax and have refused to pay taxes which go for war and the bomb for these past eight years." [1]

Throughout his life, Hennacy wrote articles for The Catholic Worker. He was a good friend of Dorothy Day, co-founder with Peter Maurin of the newspaper. In 1952, he was baptized a Catholic.  His relationship to religion remained complex and full of constant examination.  Hennacy used his writings, to criticize the church as well as the government, because he believed both institutions compromised the principles of non-violence and compassion.  From 1953 – 1961, Hennacy became an associate editor for the Catholic Worker.

In 1961, he moved to Salt Lake City and with Mary Lathrop founded the Joe Hill House.  Joe Hill was an organizer for the Industrial Workers of the World [I.W.W.] who was executed in 1915 on a false charge of murder. The Joe Hill House offered shelter to transients whom Hill had tried to organize. Hennacy was against the death penalty, and by naming the Joe Hill House in his honor, Hennacy felt it was a way  to keep Hill’s name in front of the city and state leaders who had allowed his execution. For seven years after moving to Salt Lake City,  Hennacy fought against capital punishment.  In fact, he died after suffering a heart attack while picketing against the impending execution of two convicted murderers.

Hennacy described his life as a "One Man Revolution". His energies were directed at distributing the Catholic Worker, speaking at rallies and assemblies all over the country against war and social injustice, and by remaining self-sufficient through manual labor to avoid paying taxes.  In addition to protests, public speaking, and hunger strikes,  he expressed his activism by writing books, columns, articles, and leaflets against war and the poor's exploitation through capitalism. When asked by a reporter "Do you think you can change the world?" Hennacy replied "No, but I am damn sure it can’t change me."

[1] The Autobiography of a Catholic Anarchist, p.199