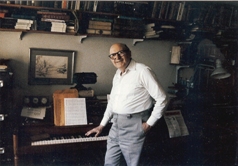 David Goldstein was a prolific composer and pediatrician who described himself as an “Apollonian,” due to Apollo being the god of medicine but also leading the muses, including the muse of music.